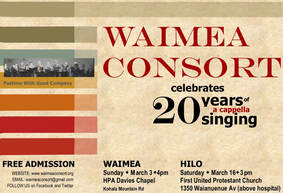 March 3 & 16, 2019:
20th Anniversary Concerts
Celebrating 20 years singing a cappella music together, the Waimea Consort presents 2 free concerts featuring their favorite songs from past performances. Works range from early polyphony to the Renaissance to the modern day - from Dufay to Lauridsen. Please join us for an afternoon of vocal music in Waimea and Hilo! 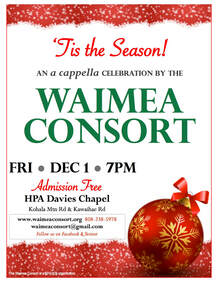 December 1, 2017: 'Tis the Season
Marking 18 years of singing a cappella songs, Waimea Consort welcomes the holiday season with a concert, ‘Tis the Season: An a cappella Celebration. Singers will present a mix of favorite carols and modern arrangements, from Praetorius to Lauridsen. 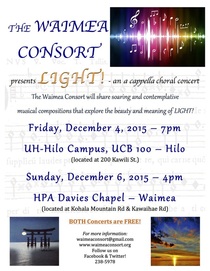 In recognition of 2015 being UNESCO’s International Year of Light, the Waimea Consort is pleased to present a concert focussed on Light in its many forms. Natural, reflected, metaphorical, and spiritual light are explored in songs about love, fire, sunrise, sunset, and the divine. Our two concerts will include pieces by Early Music composers Thomas Tallis, Thomas Morley, and Tomás Luis de Victoria. Contemporary works include compositions by Morten Lauridsen, Guy Forbes, and Eric Whitacre. 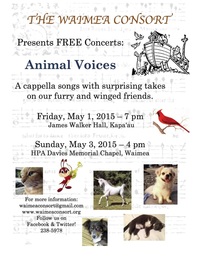 In our Animal Voices concerts, we'll be exploring various corners of the animal kingdom - from the very small to the very large. Some are even imaginary! As usual, it will be a mix of early a cappella works and contemporary ones. Some of the composers we're featuring in these concerts are: Josquin des Prez, Clément Janequin, John Rutter, Ola Gjeilo, and Eric Whitacre. 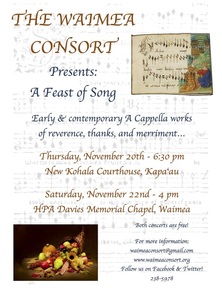 Just in time for Thanksgiving, the Waimea Consort is pleased to present A Feast of Song. Each song in our selection has a distinctive flavor and texture of sound, language, and form. Most of the a cappella works we will perform explore themes of gratitude and reverence; others are simply fun. Some of the featured composers in this concert are: René Clausen, Eleanor Daley, Pierre Certon, Kentaro Sato, Sergei Rachmaninov, and the ever-popular Anonymous. 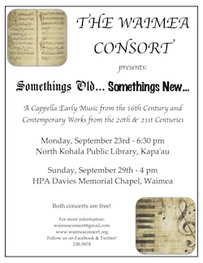 The Waimea Consort is back again to bring a cappella choral music to the Big Island of Hawaii. Two North Hawaii concerts will offer a semi-eclectic mix of works from the 1500's as well as pieces from the 20th and 21st centuries. The accomplished singers of The Waimea Consort hope to show the communities of Kohala and Waimea how beautiful both Early and Contemporary choral music can be. Please join us for this exploration of music from two very different time periods! 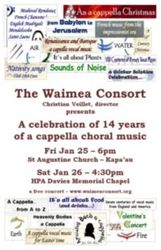 This concert will give the Consort the opportunity to revisit some of the pieces which were the highlights of its young years as it is entering its teens. From Monteverdi to Milhaud, Dufay to Duruflé, Tallis to Tavener... the program will explore the rich a cappella repertoire which has been one of the trademarks of the ensemble over the years.

While this concert will be more an au-revoir than an adieu, it will definitely be an evening of celebration of a cappella vocal music, which current and past singers of the Consort will be happy to share with you!